Does Drilling Ruin A Safe?

Upon hearing this, many callers react with surprise or confusion. The misconception many people have seems to be that not only can I open every safe by some magical process in which I divine unknown combinations, but when the door finally swings the safe is ready to go back into service with no further work . . . wrong.

While it's true that some safes can be opened without damage, many can't be opened thus. First you need to understand that there are different ways to open safes:

Manipulation:
This is the James Bond/Jimmy Valentine/Raffles type of safe opening . . .

The tuxedo-clad operator steals away from the cocktail party to the upstairs study, goes unerringly to the safe concealed behind the framed picture on the wall. His clever fingers expertly twiddle the dial for a few turns, after which the safe opens. He extracts the valuables, locks the safe, then returns to the party, and nobody the wiser. No force, no noise, no damage; not a shred of physical evidence left behind.

The preceding scenario has been promoted so often in various media that people have come to accept it almost automatically, to the point that this image of "safecracking" comes immediately to mind for millions of people. It's been immortalized in TV, movies, and print.

Time for a Reality Check: The manipulation process only applies to safes with mechanical locks operated by numbered dials. Manipulators combine sight, sound, and touch with detailed knowledge of combination lock design and operation.

An experienced manipulator can identify which type of mechanical lock design he or she is dealing with, as well as whether or not it's a good manipulation candidate.

Besides being my first preference, manipulation is my specialty in the safe opening business. I'm very good at it, but let me be first to tell you: I can't open every mechanically-locked safe by manipulation.

For various reasons, not all mechanical locks are good candidates. Some are specifically designed to resist manipulation. Others are in such poor condition that manipulation isn't practical or feasible.

Since manipulation training was first offered in the 1950s, thousands of safe technicians worldwide have learned the basics of the process, But just knowing it's feasible and how it's done doesn't automatically make a technician good at it. Of thousands who learn basics, only a small percentage practice and gain enough proficiency to apply it routinely and successfully in their day-to-day work. The majority of technicians content themselves with knowing the basics of how it's done.

So yes, manipulation is a real and viable process, and no, it's not always feasible.

Thus, it's not realistic to hire a safe technician to open a safe and stipulate that he or she must open that safe by manipulation. Not only do skilled manipulators get no guarantees the process will work, always keep in mind that it's the result (open safe) that is for sale in the first place, not the process.

When it comes to opening a safe, you're buying the result, not the process.


Drilling:
This is the opening method used by most safe technicians. Drilling into a strategic part of a safe's lock allows the technician to defeat the locking function.

To open a safe by drilling, the technician must know something about the specific lock used in the safe. Just drilling a hole any old place won't defeat a lock, A drilled hole must be placed precisely, and after a hole to the lock is made, the technician needs to know what to do next.

Also, when it comes to drilling, there's no secret "sweet spot" known only to the initiated and which will allow the driller to open any and all safes. Drilling locations (not to mention results) vary widely, and are dictated by a variety of circumstances.

Safe makers anticipate drilling attacks by placing drill-resistive barriers between the door front and the lock. Such barriers are intended to stop, slow, or complicate the drilling process. They require special drilling gear to penetrate.

As long as the hole(s) being drilled are knowledgeably placed, drilling doesn't ruin a safe. Locks and dials can be replaced. Holes drilled by safe technicians can be plugged securely.

An ignorant, careless, or poorly-equipped safe technician can do damage that makes a locked safe more difficult to open, or worse, impossible to repair efficiently. A common enough scenario is to get a job assignment to open a safe, arrive, and then find that "someone else" has already tried and failed to open the safe in a previous drilling attempt that was abandoned.

When that's the case, the opening price usually increases, especially if damage done in a previous unsuccessful opening attempt wasn't disclosed during the initial negotiations.

If you hire a safe opener who tries, fails, and leaves the safe damaged, be sure to disclose this fact when you contact whoever you're thinking of hiring next.

Popular posts from this blog

Antique Safe Prices & Values: "How Much Is It Worth?" 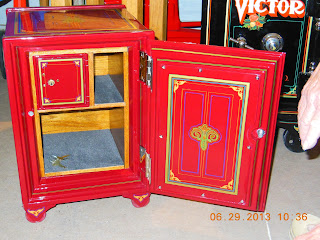 Copyright 2009 by Ken Dunckel Owner/Operator, Safecracker Safe and Vault Opening and Repairs San Francisco Bay Area and Northern California 415-203-7298 kendunckel@gmail.com Antique Safe Values Rather than attempting to be a "Blue Book" of old safe values, this blog entry is aimed more at giving readers some realistic perspective about that old safe they might be thinking of selling . The most often-asked question about old safes is "how much is it worth?" If it's really old, a safe company representative will usually say something to the effect of "nothing," or "not much." Remember, the safe company is in business. From a business/commercial standpoint, the safe company has to approach the question with this thought in mind: "Can we resell this safe at a profit, after the expense of moving, loading, hauling, unloading, servicing, cleaning, and storing it?" The second consideration is if a safe is very old, it mi
Read more 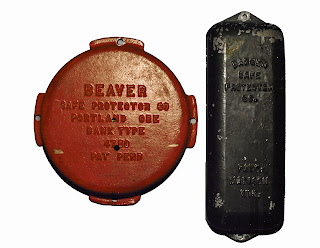 Safe Protectors When people acquire locked safes, the most natural reaction is wanting to know what's inside. Let me be the first to tell you: Old or new, most locked-up safes acquired without combinations will prove to be empty. Obviously there are exceptions, but for the most part you shouldn't expect to find someone's valuable forgotten/abandoned stash of money, jewelry, or whatever. True enough, the only way to know for sure is to open it and do a thorough inspection. It's also a fact that a small percentage of such safes do have contents. Until you know, the answer to the "what's inside?" question is "anything that fits." Contents really can be anything, ranging from worthless to worthwhile. No matter what opening process you choose, though, be careful the first time the door swings. Just as a locked safe can hold valuables, it can also hold dangerous things. What follows here might have you thinking twice about tearing it op
Read more

December 22, 2012
Ken Dunckel Safecracker Safe and Vault Service SF Bay Area and Northern CA CA License 1985 CA Contractor 553337 415-203-7298 Is Your Safe Combination "On File?" Lots of people whose safe combinations are lost/unknown ask me if there is some "master override" combination, or some "reset code" that either I or they can enter, open their safe, and return it to service. The answer is yes for some safes, no for others. Sometimes there is a combination that might be usable. It all depends on the safe make, the safe maker's policy around this sort of thing, and the lock installed on the safe. If your safe has a mechanical dial: (That is, a numbered dial that must be turned a varying number of times in alternating directions to open the lock.) Forgive me if I over-explain this. I just went through hell on the telephone yesterday with a lady who could not comprehend the concept of push-button electronic safe locks vs. mechanical. Depending on t
Read more