Showing posts from February 1, 2009
Show all 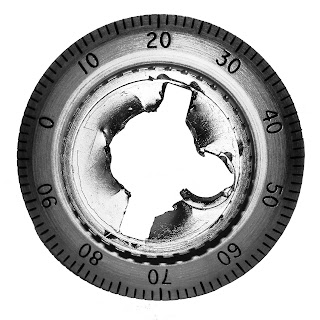 Needless Damage It never hurts to make sure the company you hire to work on your safe is qualified, competent, and established. In fact, it's essential. What you see at right is the result of hiring a person who didn't know the first thing about the job he was hired for. Here's how it happened:  A man called me about getting a safe open. His brother had died, and the caller was the executor of the brother's estate. While going through his brother's home he found a locked safe in the garage. He also found a record of what appeared at first glance to be the safe combination. As the executor, he needed to inventory the safe's contents. When he tried the combination he'd found, it didn't work. After repeated unsuccessful tries, he concluded that a) either he had the correct numbers but wasn't dialing them correctly (very common), or b) the numbers he'd found were wrong (also very common). I asked a few questions, then told the calle
Post a Comment
Read more

February 03, 2009
Basic Pointers for Do-It-Yourself Safe Movers Truth is, safe moving is not for beginners, unless yours is so small as to be almost inconsequential in terms of its weight. That said, I at least understand the appeal of moving that safe yourself. It's the money, isn't it? You called a safe moving company (or maybe even a furniture mover), heard an estimate or flat rate quote, and it rocked your world. How could they want so damned much to move a box? Here are the rationales that get safe owners into Do-It-Yourself safe moving: Those guys want more to move it than I paid for it! or a variation of the above Those guys want more to move it than it's worth! Are "those guys" being opportunistic or unreasonable? If they're experienced and properly equipped to do the work, the answer is "probably not." Whatever the case, that's what gets a lot of people thinking about ways to avoid the rip-off safe movers. After all, how hard can it be?
3 comments
Read more
More posts